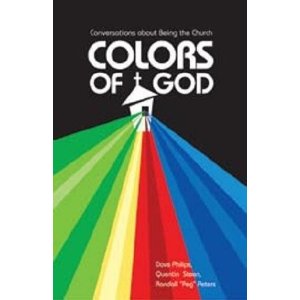 Link to buy on Amazon

I really wanted to love this book! When I first received it I looked on the back and saw this quote, “OK, so the church is broken, now what?” I was immediately engaged – my interest peaked! You’ll probably love this book if you are already angry at the evangelical movement – for you to find a voice that tends to your wounds; I am grateful.

The first thing I’d like to mention is that the format of this book feels like you are the third wheel of an IM discussion about you and to you without you getting to put in your own two cents. They said their reasoning for creating the book in this way was to make the reader feel like a part of a discussion – that didn’t work for me…though I am certain that there will be many that find this approach refreshing and maybe even better at holding their attention. I found the responses to not be genuine to real conversations – there is never disagreement and there is a lot of unnecessary dialog between the authors. At the end of the day it felt less conversational and more scripted.

The book begins by stating some great questions and explaining the journey of each of the authors to where they are currently (neXus). They talk about no longer fitting within the current structures of the Evangelical Movement – saying it’s not about the people just the structure and sub-culture (this is like saying, “Hate the sin not the sinner” – which feels like hate when you’re the sinner). They allude to the evangelical movement as not being open to dialog yet turn and disregard the evangelical movements discussion(s). You can’t tell someone they aren’t listening or willing to talk and then refuse to listen or talk.

The part that I found to be the most fascinating is that though they speak about how they are so much different than the rest of the church because of their highly evolved grace gospel – I found them to not be gracious at all about any view other than their own. In fact there were several parts throughout the book where I was offended by, what they’d probably call – playful banter…it felt more like mocking to me. This aspect of their personality came through when speaking about the “old-covenant” – in fact their handling of many of their doctrines felt very much like the evangelical movement…they weren’t saying anything new except that they felt it was “absolutely bizarre” to make “reading the Bible daily a central evidence of growing faith.”

It seems that as a reaction to the often oppressive teachings of many churches (the notion that to become more like the Christ is to become more perfect – therefore performance driven) they’ve thrown out any semblance of personal responsibility for participating in God’s creation. They encourage you to participate but it feels like they are saying that participation is a bonus.

Much of the biblical exegesis was poor at best – and even if it was good – most wouldn’t know because they give no reason for going against long held understandings…many of the long-standing beliefs need to be reworked and questioned but please don’t state as matter of fact your view dismissing tradition and not give any real support.

I’d be interested in reading more from these gentleman and it sounds like what they are attempting to do with neXus is a great thing – God’s Kingdom needs to be more inclusive but we shouldn’t disregard the great cloud of witnesses that have gone on before us.